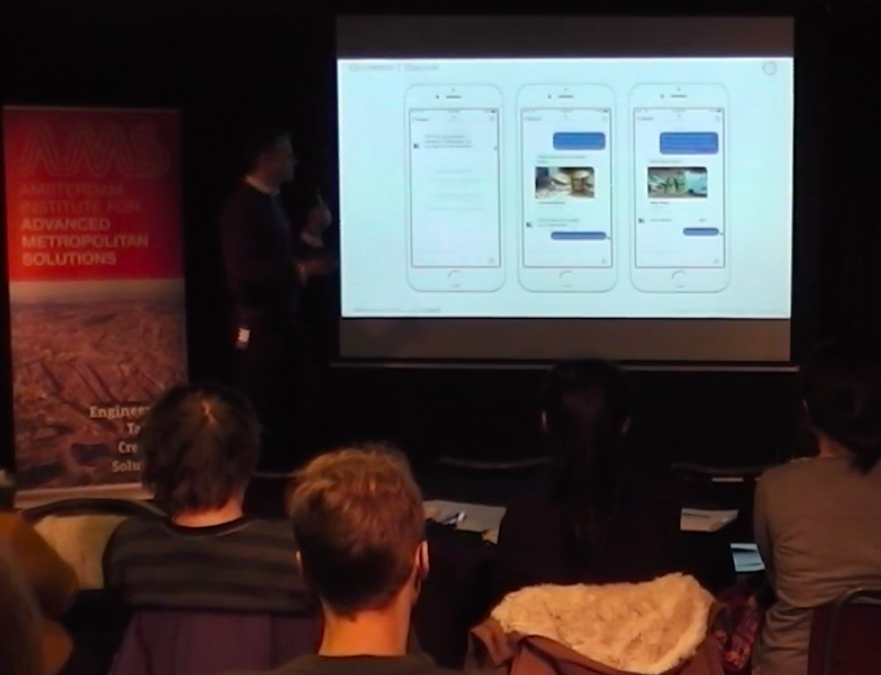 Messenger applications, such as Whatsapp, Messenger, Telegram, or Wechat, represent a popular medium of communication, which people use to interact with friends, family members, and various brands. In 2015 the total number of active users of such applications surpassed the total number of users of conventional social network applications. Chatbots are computer programs living in messenger applications and emulating a conversation with a human to provide a certain service. Such it is possible to order pizza from Dominos using their Facebook messenger chatbot or to check the weather talking to the cute cat Poncho.

While messenger applications are already de-facto standard for brands to communicate with their clients, such medium is less popular in urban environment connecting citizens and city stakeholders. We not only believe that city stakeholders should consider such communication channel, but we argue that chatbot could as well become a convenient way for both sides to establish such communication at scale. As the first step towards implementing this vision, we introduced a mockup of Amsterdam chatbot.

Brainstorming session on chatbot use cases in urban environment

In February 2017, SocialGlass researchers organized an event at Pakhuis de Zwijger (a platform for discussing city-related topics): AMS Science for the Cities – Improving cities through social media (a video of the event is available here). During the event, we asked the audience to help us and to brainstorm ideas, what citizens could ask such bot for, and what kind of information citizens could provide such bot with. In the table below we summarise the ideas, we collected from the audience.

More than 60 people with diverse backgrounds (e.g., students, industry employees, researchers, municipality employees), representing various nationalities, attended the session. The age of the participants ranged from 20 to 75 years, and around 40% were women. About 50% of the audience expressed their prior familiarity with chatbots.
We asked participations to pick any topic from the table above (or a different) and come up with a paper mockup of the conversation about it. We spread around conversation templates along with printed stencils of things users and bots can reply with.  We had participants working in 10 teams, and they produced their high-quality mockups, which happened to be very insightful and sometimes unexpected. Below we show the list of use cases which teams focused on, and examples of conversations they came up with.

An example of mock-up produced by participants

The high engagement of the audience during our co-creation session suggests that people are excited about the new opportunity to be able to get relevant information (such as safety reviews, construction schedules, event recommendations based on real-time ambience) as well as to report on various issues (such as potholes, trash container conditions, safety) in city context without extra effort of installing an app or navigating complex websites. At the same time, surprisingly, the navigation use case, which is discussed a lot in the literature, did not arise during the session, suggesting that this particular use case is already well covered by other systems (e.g., GoogleMaps) or that participants did not consider it appropriate for a conversational interface. There is a big room for solutions recommending places (e.g., for spending free time), and presenting municipal, governmental, and neighborhood- related information (e.g., planned interventions, trash bin status, etc.).
The results of this co-creation session have been published in a paper presented at the First ACM Workshop on Recommender Systems for Citizens (CitRec2017), co-located with ACM RecSys 2017.